Advertising is often thought of as pretty straightforward, and it can be tempting to follow boring formulas to try to get your message across to consumers. But, there’s one thing that many people forget: advertising can be magical! When making an effort to push the limits of what’s possible, you might just be surprised at the results you’ll get.

Are you not convinced? Then just keep reading to see how one group said some magic words on their billboard, and really got noticed because of it.

There has been a magic festival held in Quebec over the past few years. In order to prove their entertainment value, they always seem to come up with some impressive ads that are much more than just a poster on the wall.

One of their most spectacular was a billboard that… Well, you should see for yourself. Watch this video before reading on.

The Magic Behind It

As the video shows, an average man was using a big mop to plaster up a straightforward sign about the show, but then things took an exciting turn. As the mop continued to work while flying through the air, many stopped to watch and be amazed.

Fortunately, or unfortunately, the video revealed the trick. It’s not actually magic (sorry). There was an elaborate system on the back that pulled the mop around using a chain and magnets, but made it look from the front like it was the result of magic actions.

True magic or not, this was really a preview of the show that they would offer. The festival is all about entertainment and allowing people to suspend their belief of reality in order to appreciate something spectacular, and they managed to prove their offerings before anyone had to pay for a ticket.

Essentially, they gave a free sample, and all they needed was a billboard to do it.

A good billboard drills everything down to one clear message and this one managed to do that.

There wasn’t any extra noise on the sign screaming about headliners or where to read the program. In fact, it was extremely minimalist. It said the name of the festival, the date, and the location. Nothing else except for a little star.

Anyone viewing it would quickly realize that if they wanted to see more (probably better) magic tricks, this festival was the place to be.

Not the Only Trick Up Their Sleeve

True to their roots as magicians, they made sure that this wasn’t the only time to wow an audience. They’ve worked with the Ig2 agency over the years, and they’ve had quite a few impressive campaigns.

In one, they looked like they were too lazy to create much of a poster, but it turned out that they needed a little help from the audience (some were even rewarded for their efforts).

Another installation in a bus stop put the power of magic in the hands of people waiting for public transit – no magic wands required.

This is an interesting example of advertising in our modern times because many people are turning towards making elaborate digital displays. This is something that could have quite easily been animated, but then it never would have been so impressive. It was completely dependent on having an actual man and a physically flying mop finishing up a billboard of real material.

That doesn’t mean that it had to remain out of the digital world, however. Many of those who saw it took photos and videos, and those will spread like wildfire on social media. Plus, a nice case study video like they created will let it live on long after the sign has been taken down – and people will still be interested in watching it.

Another benefit of this is that it makes people wonder how it happened. That’s the most common question at a magic show, and anyone who can’t figure it out is likely to share it with their friends to try to help solve the mystery.

Magicians don’t always want to reveal their secrets, but it was a good choice to do so in this video. Knowing how it works really convinces people of its authenticity, and that makes it all the more impressive. 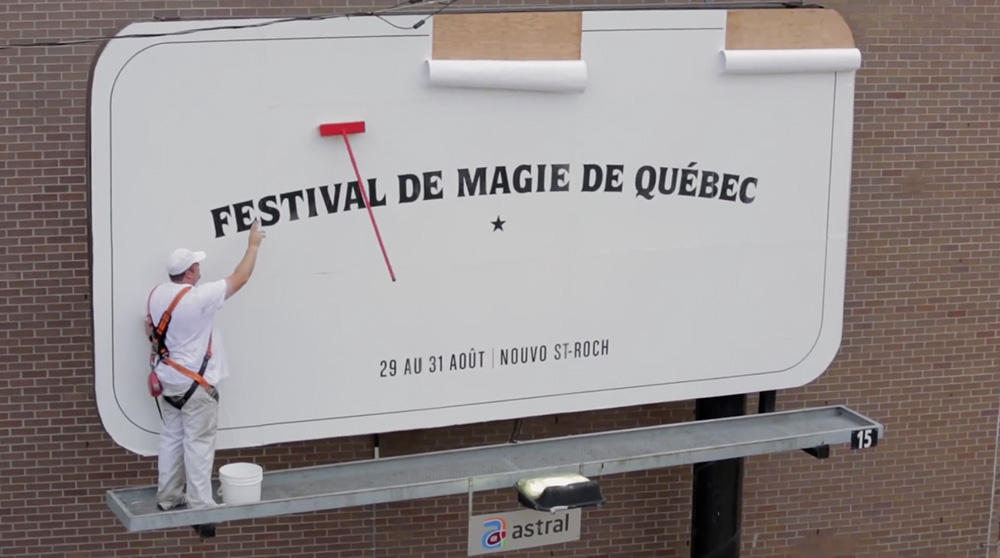 Many Ways to Build Billboards

Another takeaway from this is that there are always more creative ways to build billboards. The digital age is pushing us toward signs that interact with people using complex systems and digital displays, but doing something like this can be just as creative.

Do you have any clever ideas to give your customers a sample of your work while also keeping them entertained? If so, we’d love to help make them happen!

Using a Billboard to Find a Job: EmployAdam.com

A Billboard of Coupons from Burts Bees
Scroll to top