No matter what state the economy is in, getting a job is always more challenging for young and inexperienced people than it is for those who have been working in their field for a number of years. Without a solid resume and some good connections, many turn to creative options to get noticed. There are many urban legends about different strategies that have worked over the years, but one man really took things to the next level with a plan involving a billboard. 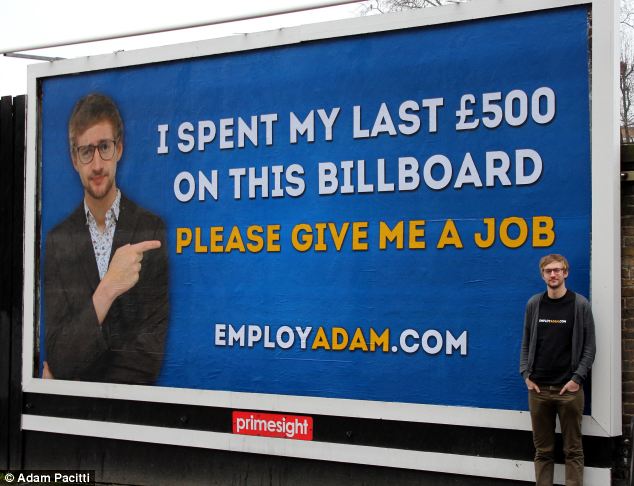 Adam Pacitti spent far too many months filling out a ridiculous amount of job applications, but he just wasn’t having any luck. It caused him to realize that he was going to have to try something a little bit out of the ordinary if he wanted to get noticed over all the other applicants, and he wasn’t afraid to invest some time and money in making it happen.

Instead of printing out more resumes, Adam had a billboard put up.

It had a noticeable blue background, a photo of him, and a simple sentence. “I spent my last £500 on this billboard, please give me a job.” At the bottom, he left the web address of how to get in contact with him: EmployAdam.com.

He was looking for a job in the media, so this use of clever advertising was a good idea. Among other things, the website contained a very well put together video resume explaining why people should hire him.

The good news for Adam is that the gamble worked. After the sign went up, he was flooded with emails and social media attention as it spread around the internet. It led to receiving plenty of job offers, and he agreed to accept one form a production company called KEO. His job was to promote their projects and to work on a series where they help job seekers come up with innovative ways to get hired. It sounds like it was a perfect fit.

Being a true promoter at heart, Adam didn’t let things stop there. He went on to commission a second billboard to update his fans about what happened. The second one was very similar in style and image to the first, but this one said: “I spent my first wage packet on this billboard, thank you for helping me.”

Again, it contained a link to his website. It seems he was happy with his job, but he wanted to make sure to keep his options open.

The second sign also received a ton of attention, so it really kept his momentum and story going. 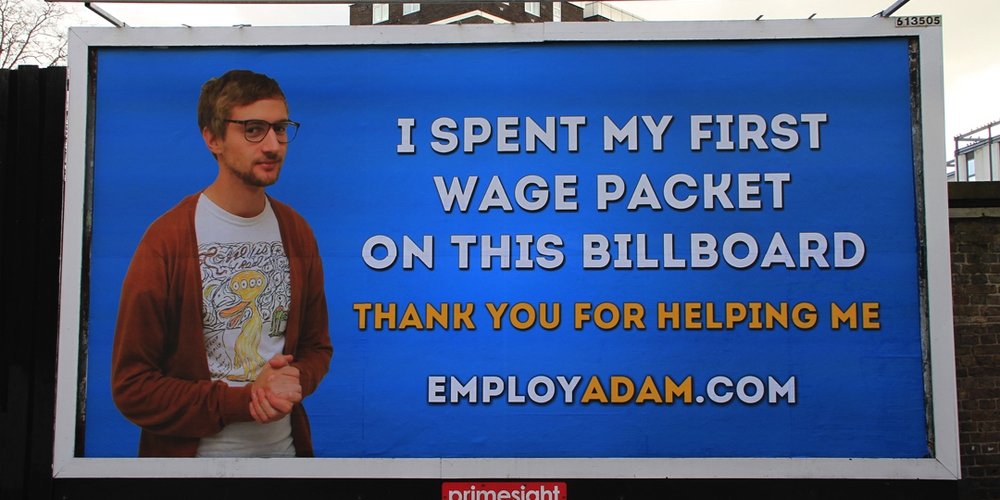 A Lot Can be Learned from Adam

This whole situation is a great example to show how a wide variety of goals can be achieved with billboards. They’re not just for global corporations who have extra money to spend on additional promotions, but they can even work for very small organizations or individuals will straightforward goals.

Before making a billboard, it’s a good idea to use some of the same strategies as Adam.

A Clear Goal and Message

One of the main reasons this sign was so successful is that Adam had a clear goal before he started (get a job), and he got his simple message across easily (hire him). Billboards generally should avoid trying to solve more than one issue, and they should act as a step in larger campaigns. Adam’s did that by giving a very obvious call to action, and everyone knew they just had to visit his site to see more.

Wanting a job as a media promoter really made this billboard a continuation of Adam’s brand. Not only did it show off who he was, but it proved he could do the type of job he wanted. It was a funny, entertaining, and well-made piece of media. In other words, for Adam, it was a resume and a sample of the kind of work he wants to do.

Where is Adam Now?

Adam now works for a media company called WhatCulture, and he has been very successful there. He has also become well-known for making documentaries and online entertainment about professional wrestling, so the story really has a happy ending.

Even if your goal isn’t to get a job, taking a page from Adam’s playbook may be a good idea. The billboard wasn’t the only step in Adam’s search for employment, but the other methods he had been trying were unsuccessful until he created the sign.

Is there any part of your marketing strategy that’s also missing one key ingredient?