Before we begin, we just want you to know that bMedia Group does not support the idea of skinvertising! 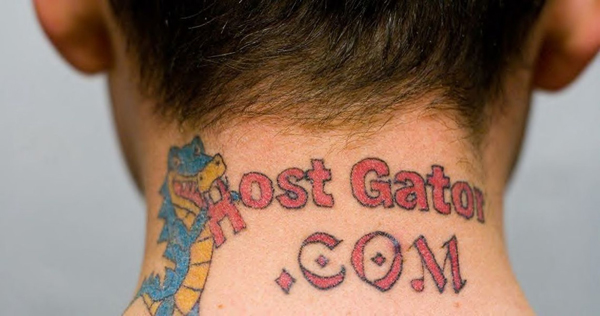 One of the fundamental requirements of outdoor media or even advertisement in general is that it needs to be placed somewhere where the intended audience can see it. However, as the world gets more crowded and competitive, there are less and less places available. This keeps advertisers hot on the lookout for any new surfaces on which to place their messages, and they often resort to creative solutions.

Coincidentally, there is one other group who loves displaying colorful messages, and their ears were wide open when they heard companies could be willing to pay for their space. This group, of course, is tattoo fans.

Skinvertising is exactly what it sounds like: when someone has an advertisement placed on their skin. Since the most practical way of doing this is by using a tattoo, it’s a pretty difficult to undo this once it has been created. However, the permanence of this has led many people to find this whole concept to be really extreme, and some even think it’s just a joke.

It’s not. Many people have literally had advertisements inked into their skin, and a good number of these designs were done on people’s faces. Obviously, you’re going to question why people are motivated to do this, but there isn’t any simple answer. Most of them find themselves in need of money (for one reason or another), and they typically set up auctions so the real estate will go to the highest bidder.

Why Do People Do It?

Everyone seems to have their own reasons for getting this done, but a common trend seems to be needing money quickly. Many of them have families and children to support, and they suddenly find themselves in a position where they don’t have enough income.

But really, who are some of these people?

Nelson was one of the originals who rocketed to internet fame with skinvertising. He was paid $7,000 to have a web hosting company’s logo on the back of his head. Ironically, the company didn’t last very long after paying for it, but the ad was still promoting them for years! 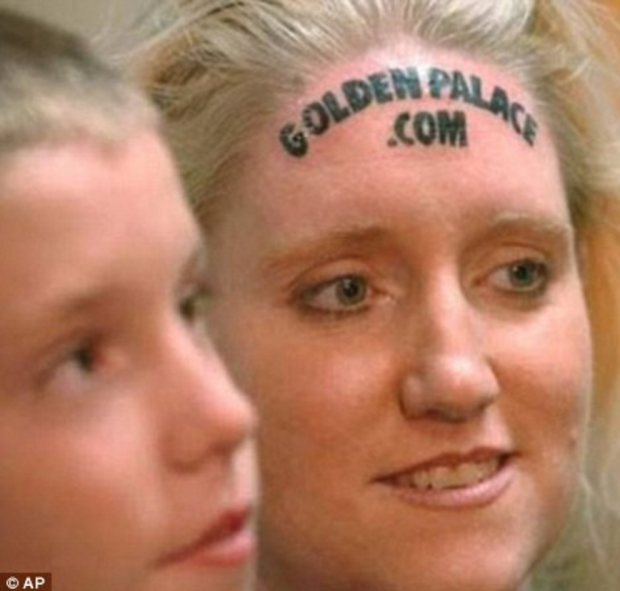 Williams was a mother who had GoldenPalace.com tattooed on her forehead for about $10,000. She said she really needed the money to support her son and send him to a private school. Eventually, she was able to grow out her bangs enough to partially cover the tattoo.

Greenlaw was another inking entrepreneur, and he auctioned off space on the back of his neck which was won by an auction site called Glob@t. He even went so far as to sign a contract that he would travel to a certain number of states and countries each year, or pay a fine to the company he was advertising. His aim was to provide for his family before his paychecks started coming in when he joined the army. 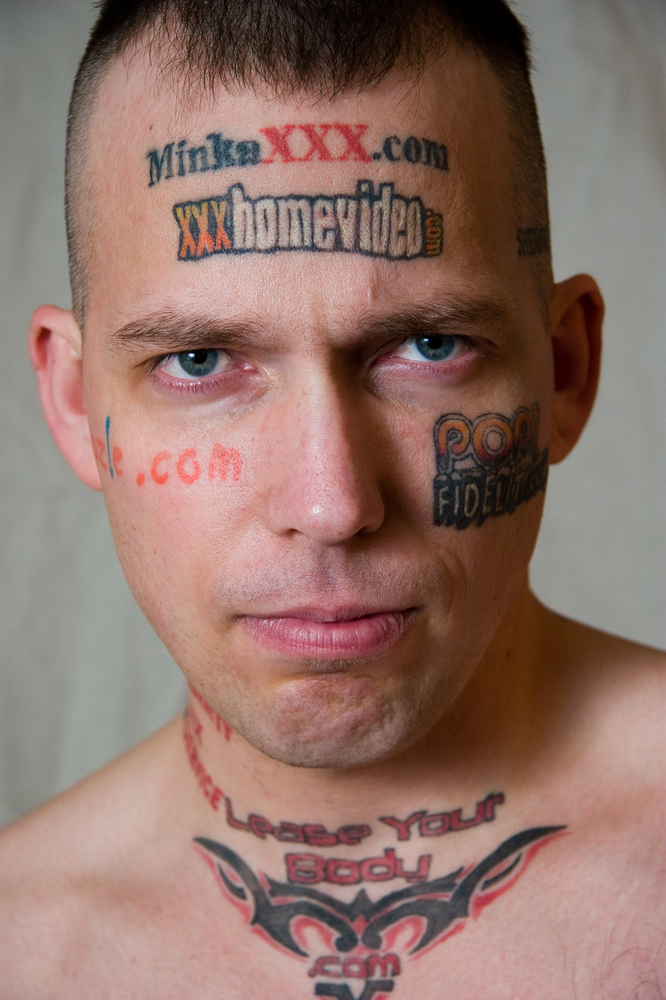 Gibby is known by multiple names, and one of them is “Billy the Human Billboard.” He lost his job in 2007, and he needed to find a way to pay the bills to support his wife and five kids. So, he started auctioning off his face for a minimum price of $4,000, and most of his customers were websites (many of which were adult focused).
Billy even legally changed his name to Hostgator Mel Dotcom in 2011, and the website Hostgator paid him $15,000 for this. But, he decided the facial tattoos weren’t working anymore in 2013, so he auctioned off other parts of his body to get enough money for laser removal on his face.

Human Billboards of the Past

While the whole concept of skinvertising may seem a little radical, attaching ads to humans is something that’s far from new. If you need a few examples, just think about how many logos and messages you see on shirts, hats, and shoes every single day. Also, have you ever noticed someone standing on the street with a big sign around their neck? That practice goes all the way back to 19th century London when the government decided to tax advertising posters stuck to walls. Always a crafty bunch, the advertisers started paying people to wear them, and a new profession was born. You’ve no doubt seen people waving signs (of various levels of quality) on the side of the road, but some are willing to take this the next step.

When Was It Popular?

The skinvertising tattoo craze really seemed to take off in the early 2000s, and it was basically riding the coattails of the dot-com bubble. It seemed to be most popular among websites, and this probably had a lot to do with the fact that all they really needed to print was the URL.

One of the most interesting parts of this phenomenon is the permanence around it. The tattoos easily stick around for a long time, but there have been many cases where the company went out of business before the person could have the ink removed.

A similar trend popped up in Japan in recent years, but it was far less permanent than tattooing. Women are paid to place stickers on their thighs, and they have to share a certain amount of photos on social media. The women have to be over 18, but it’s definitely following a provocative strategy that believes sex sells. However, many Japanese cities are pretty saturated with regards to their advertising space, so it’s not a bad idea to find some new real estate.

Love It or Hate It, Skinvertising is Creative

There are a wide variety of opinions about this topic, and there’s a good chance you have strong feelings about it. However, whether it’s a genius idea or absolutely ridiculous, you have to admit that it solves a certain problem.

What’s the most creative thing you’ve done to get word out about your company?

A Billboard That Tracks Airplanes