In the case of a recent British Airways advertising campaign, the sky was literally the limit.  Through a mixture of old and new, they pushed the limits of billboard advertising to give the world something that had never quite been seen before.

When measuring by size of fleet, number of routes, and revenue, British Airways is the largest airline in the United Kingdom.  However, the industry is incredibly competitive, and the company still has the desire to soar to new heights with their ad campaigns.

This led to them creating two digital billboards in London.  These specific signs were located between the view of people on the street and the flight paths of planes coming and going from Heathrow Airport.  Advanced technology was integrated into the display that could track planes as they flew overhead, and that’s when the magic would start.

A video would start to play that showed a child point at the airplane and run off after it. The sign would also give the flight number and location that the plane took off from, and then it would go back to a very simple display about British Airways.

Why Did They Take This Route?

British Airways entered into the campaign with a few main goals, and one was wanting to remind customers of how many global destinations the airline operates out of. Next to that, they wanted to point out some newer destinations, and they hoped that it would inspire consumers to log on to the British Airways website and book a trip.

On the other hand, this wasn’t a campaign that simply advertised a hashtag. It was all planned around a strategy that would help consumers connect with the brand on an emotional level. It’s a common practice for people to look up to planes in the sky and dream that they’re on their way to an exotic location, and this billboard found a way to bring back early memories of everyone who saw it. Using a child allowed viewers to connect with the feelings of being amazed by flight when little, and it avoided all the thoughts of disillusionment brought on by lost luggage and long delays.

The Technology Behind the Billboard 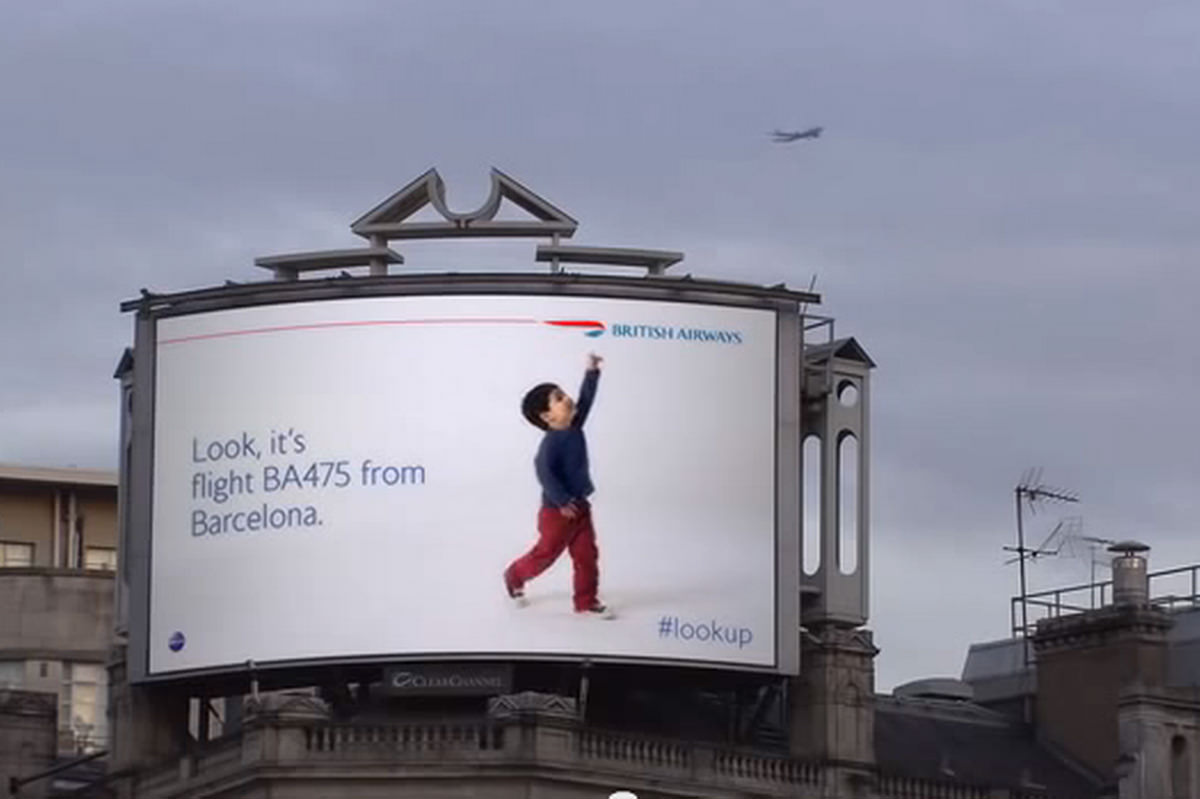 The sign used a surveillance system that was custom built specifically for this campaign to make sure it tracked actual planes, and it made sure that the video was synchronized with the planes as they zoomed by. In order to identify which plane it was, it used a special antenna that could register the transponder of all aircraft within a certain radius.  The programming also took many other factors into consideration.  For example, it thought about the altitude of the plane, the cloud cover in the sky, and the light (or lack thereof) to ensure that people could accurately see what they were intended to

Reaction from the Internet

A dedicated webpage, ba.com/lookup, was created specifically for the campaign.  It was designed to help customers easily convert their longings into bookings, and it enabled them to spend more time packing their bags.  It seemed to work because it received more than 43,300 unique visits.

Also, the video of the sign was viewed more than 1.3 million times online, and the campaign earned more than 45 million social media impressions. #Lookup was displayed under the video, and it was used more than 3,400 times on Twitter.

The whole campaign was developed by the Ogilvy 12th Floor agency, and it was a success overall. At the Cannes Lions International Festival of Creativity, the campaign won the Direct Grand Prix.  Similar concepts had been tried in other parts of the world, but this was the first of its kind in the United Kingdom.

Mix of Digital and Traditional Marketing

One of the biggest takeaways from this campaign is that advances in technology don’t necessarily have to mean the death of more traditional forms of advertising.  Print ads may seem far less relevant than online media that keep customers one click away from a purchase, but these digital innovations can take certain platforms in a full circle.  In a world full of clickable computer code, a giant video might be just what it takes to stand out from the crowd.

The Impact on Other Companies

Even if you’re not an airline, there’s a way in which you can harness modern technology to advertise your business using outdoor media.  Get in touch with us if you’d like some assistance with a new concept, but first make sure that both your seat and tray table are in their full upright and locked positions!

What is Skinvertising?
Scroll to top