Billboards aren’t always used to continue a previous ad campaign, but it can be a great idea. Also, billboards don’t usually insult or scare the customers watching them. Not only was that seen as impossible throughout most of advertising history, but it was also viewed as a bad idea to hurt the feelings of the people who you want to buy your product.

However, one well-known candy bar brand managed to do all of the above with their Snickers billboard, and it worked out well for them.

A digital Snickers billboard was set up on a street in New York City. The image showed the famous scene from the 1955 film Seven Year Itch when Marilyn Monroe was standing over a blowing subway grate in a white dress. But, when passersby stopped to look a little bit closer, something happened. Marilyn suddenly looked, well, different.

She would quickly change into the face of Willem Dafoe, but he was still wearing the white dress and recreating the scene. He’d be looking right into their face, and he’d have a big frown – quite different from the lovely smile worn by Marilyn. It may have freaked out quite a few pedestrians, but it certainly got people talking.

Part of a Bigger Snickers Campaign

This may sound like a bit of a random thing to have a billboard do, but it makes complete sense if you know the whole story. Snickers has had a long running campaign of famous people being angry in situations where they didn’t quite fit, and then someone around would give them one of the candy bars. After eating a bite, they’d turn back into someone who made complete sense in the situation.

The whole concept is that “You’re not you when you’re hungry,” but the Snickers bar can bring you back to life. So, the brand decided to use that concept to make that a Super Bowl commercial in 2016, and they went with the whole scene of Dafoe reenacting the iconic image before some tasty chocolate turned him back into Monroe. They made the billboard a few months later, and it served as a brilliant continuation of the ad.

The Snickers Billboard Was Watching

It may seem like this was just a random changing billboard, but that’s far from the truth. It actually had facial-recognition software built in, so it knew when people were stopping to look at it. If it didn’t have this capability, it wouldn’t have had such an impact because it wouldn’t have been able to startle people. But now, the timing was perfect, and the angry Dafoe was glaring right at the people who would soon subconsciously purchase a Snickers bar when in a bad mood. 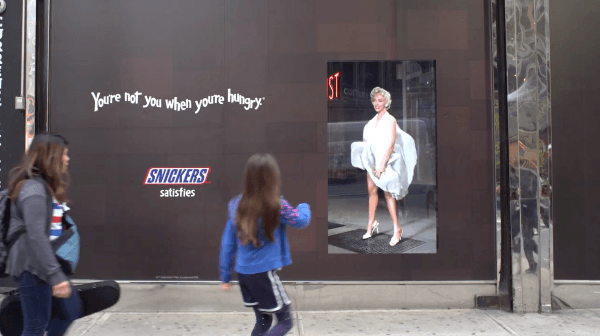 Reaction in the Ad World

Both ads were created for Snickers by BBDO New York, and they got a lot of praise throughout the ad industry. Many were impressed at how they were able to resurrect a Super Bowl ad months later, and it’s used as a case study about the successful implementation of facial-recognition software in a billboard. It seems that’s something that people are going to see quite a bit more of. 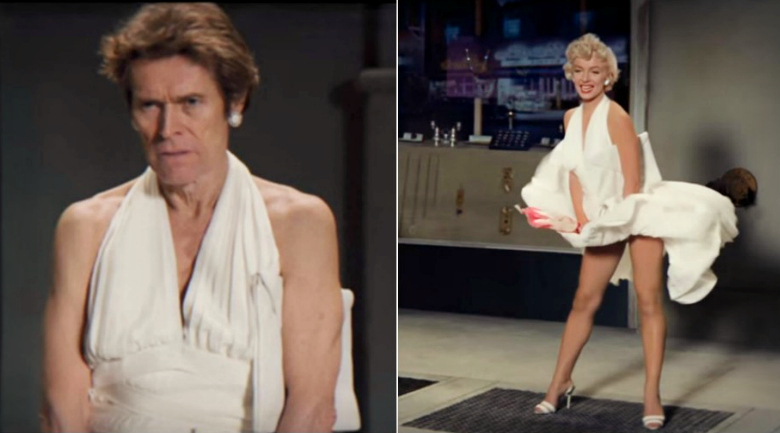 In a world where technology seems obsolete about a week after it’s introduced, many people think that billboards are an advertising form of the past. However, this is a perfect example of why they’re not. Most of the people walking by the billboard were interested in it just because it was digitally moving and recreating a famous movie scene where it would’ve taken place. The rest of the world took notice of the campaign because of what happened after that, but the people who saw it would have been interested even if it didn’t have Willem startling them in such a memorable way.

Another big lesson to learn from this campaign is that you don’t have to limit your advertising to one type of media. Different ads can serve various purposes across multiple different platforms, and this can help to increase engagement and spread your message. This situation even shows that they don’t have to be made at the same time. The Super Bowl commercial came out months before the billboard, but it was brought back to life by the new sign that pushed its way into people’s lives.

Get Creative with Your Own Campaigns

Even if you’re not a producer of candy bars with a budget able to hire celebrity endorsers, putting some creativity into your advertisements can really help your bottom line. But, you don’t necessarily need to pay top dollar to an advertising agency to make it happen. If you have an idea you’d like to see turned into a reality, just get in touch with us for some help. Just make sure to grab a Snickers first, we prefer to deal with people in a happy mood!